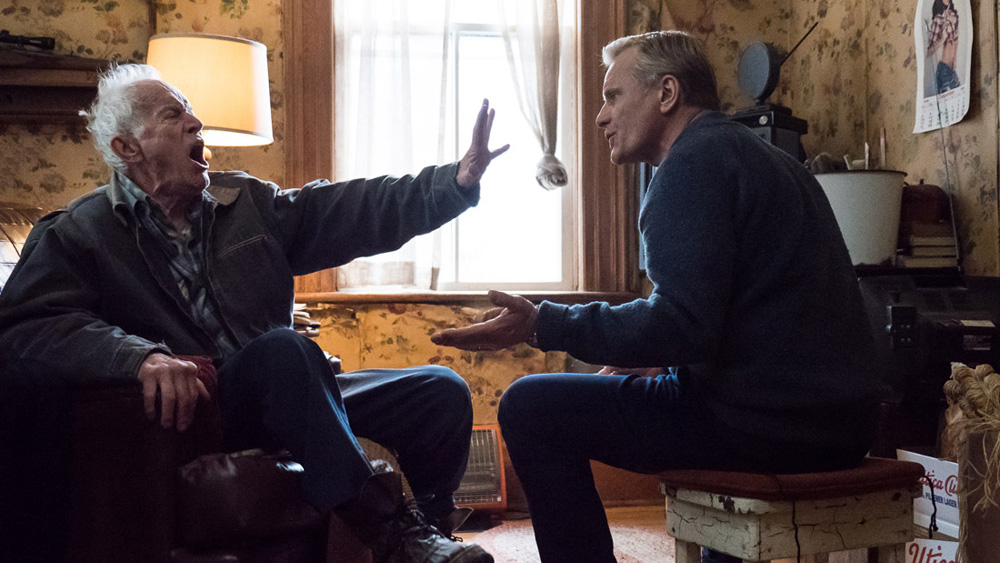 Oscar-nominated actor Viggo Mortensen will make his feature directorial debut with Falling which makes its premiere in theaters, digital and on demand today. Mortensen went all-in with his feature debut because also wrote, starred in and composed the score for Falling to show us that he’s not just a one-trick pony (but was there any doubt?)

Falling follows John (Mortensen) who lives with his partner, Eric (Terry Chen), and their daughter, Mónica (Gabby Velis) in California. This is far from the rural life from his past His uber-conservative father, Willis (Lance Henriksen), who is facing early stages of dementia, lives alone on the isolated farm where John grew up. When John brings Willis to Los Angeles in an attempt to relocate him closer to family, their relationship begins to unravel as Willis refuses to change his way of life.

The family drama made its world premiere in 2020 at the Sundance Film Festival before screening at Cannes and the Toronto International Film Festival. Quiver Distribution landed U.S. rights to Falling in December 2020.

When Mortensen and the cast visited Deadline’s Sundance Studio last year, the actor-director said that the idea for Falling came after his mother died. She started to write a short story about the dynamic between her and Mortensen’s real father. From this, he thought of a story about finding common ground with someone you disagree with.

“As I was writing the screenplay, I was thinking about what’s actually happening in the country,” he said. “How do you deal with hate speech or with someone who just doesn’t accept, won’t even listen to you, doesn’t want to know anything about what you perhaps stand for, what you identify as — all those kinds of things.”

In the film, Henrikson plays a homophobic father and the character made him more aware of LGTBQ culture. He said his 20-year-old daughter goes by the pronouns ‘them’ and ‘they’”. He didn’t know how to react, but he accepted it.

“This movie made me realize the world is changing,” Henrikson said. “We’re being held back by some politicians that are a little bit messed up in the head. They’re more about commerce than they are about what needs to happen…I mean, there’s so much going on and [there’s an] attempt [to] make the world a better place. That’s the job.”

The film also Sverrir Gudnason and Laura Linney. Watch the trailer below.

Known for helming complex and unique sci-fi drama like Another Earth and I Origins, filmmaker Mike Cahill brings us his distinct vision and storytelling sensibilities with his latest pic Bliss, which drops on Amazon Prime Video today.

In line with Cahill’s sci-fi fare, this mind-bending romance stars Owen Wilson as Greg, a recently divorced man who was also fired from his job. In other words, things aren’t going well for him. He just can’t catch a break.

Greg’s life takes a turn when he meets Isabel. She’s a mysterious woman living on the street that believes this trash world is nothing but a computer simulation. At first, Greg thinks this theory is ridiculous but eventually discovers there may be some truth to Isabel’s QAnon-esque bonkers conspiracy theory.

Filmmaker Nicholas Ashe Bateman is starting his own cinematic universe starting with the fantasy epic The Wanting Mare. This is a set up to a long line of films about the people, places, and legends of the world of Anmaere. The Wanting Mane hits U.S. theaters and VOD today.

Written and directed by Bateman The Wanting Mane stars Jordan Monaghan, Yasmin Keshtkar, Edmond Cofie, Nicholas Ashe Bateman, Josh Clark, and Christine Kellogg-Darrin. Set in Anmaere, north of the city of Whithren, we find wild horses run through the moorlands and up the coast. The horses are the city’s most valuable export and, as a result, are hunted, trapped, sold, and shipped across the sea once a year. For those in Whithren, this trade passage provides the opportunity for them to escape their constantly sweltering city and escape to the Western continent of Levithen where they can have a fresh start.

In a small house just north of the city, a young woman who dies in childbirth breathes her last words that are an attempt to tell her daughter Moira about the life she’ll have and her inheritance of a recurring dream that must be kept secret. While living in Whithren alone, Moira keeps these secrets to herself and resolves to leave Whithren at all costs. She looks to a man named Lawrence who has criminal enterprise of stealing tickets. This begins a series of events that echo over the next 35 years of their life.

In Filippo Meneghetti’s Two of Us we are introduced to two retired women, Nina (Barbara Sukowa) and Madeline (Martine Chevallier). They have been secretly in love for decades.

Everyone in their life thinks they are neighbors that share the top floor of their building. They come and go between their apartments, enjoying the affection and pleasures of daily life together. Their lives change when an unforeseen event turns things upside down and leads Madeline’s daughter to gradually unravel the truth between them.

Two of Us marks the feature debut of the French director who co-wrote the film that made its world premiere in 2019 at the Toronto International Film Festival. The film is France’s submission to the International Feature Film Oscar race.

Deadline’s Todd McCarthy said of the film: “The unusual mix of a quasi-Hitchcockian approach with modern sexual politics marks Deux, as it is known in its home territories, as a potential sleeper not only with art house denizens but with stuck-at-home viewers up for a taste of something different.”

Magnolia Pictures releases Two of Us in theaters and PVOD digital platforms today.

IFC Films’ Little Fish from director Chad Hartigan (This is Martin Bonner, Morris From America) is a movie that hits close to home…may be too close to home.

Starring Olivia Cooke (Ready Player One, Bates Motel), Jack O’Connell (Unbroken, Skins), Soko (Her, The Dancer), and Raúl Castillo (Looking, We The Animals), Little Fish is set in Seattle in the near future during a — you guessed it — a global epidemic.

The world is on the brink of calamity due to Neuroinflammatory Affliction (NIA), a severe and rapid Alzheimer’s-like condition in which people’s memories disappear. Some cases find memories fading over weeks or months. With others, their memories vanish in an instant.

The story follows Jude (O’Connell) and Emma (Cooke) as they grapple with the realities of NIA. All the while, we see glimpses from the past as the two meet and their relationship blooms. But as NIA worsens the lines of the past and present blur making it more and more difficult to know what’s true and what’s false.

Little Fish opens in select theaters and on demand today.

Written and directed by Thomas F. Mazziotti, The Mimic is based on a true story and follows a man referred to as “The Narrator” (Thomas Sadoski) and his neighbor who is referred to as “The Kid” (Jake Robinson). The two befriend each other as members of the local newspaper team.

The Narrator is obsessed with the idea that the Kid may be a sociopath. He goes to extreme lengths to uncover the truth about him and his wife, a woman he begins crushing on. Between long walks down the street, a twisted dinner date, and a car drive gone terribly wrong, The Narrator gets closer to the truth about The Kid — but the truth isn’t exactly what he expected.

In A Glitch in the Matrix director Rodney Ascher (Room 237, The Nightmare) asks the question: “What if we are living in a simulation, and the world as we know it is not real?”

In order to answer this question, Ascher uses a noted speech from Philip K. Dick to dive down the rabbit hole of science, philosophy, and conspiracy theory. The film uses contemporary cultural touchstones like The Matrix, interviews with real people shrouded in digital avatars, and a wide array of voices, expert and amateur alike. Through all this, A Glitch in the Matrix attempts to solve this mystery.

A Glitch in the Matrix made its debut at Sundance. It is now playing in select theaters and available on VOD platforms and in virtual cinemas.

A remake of Grímur Hákonarson’s Icelandic drama, Rams is directed by Jeremy Sims and is set in Western Australia where two estranged brothers, Colin (Sam Neill) and Les (Michael Caton), are at war.

They are both raising separate flocks of sheep descended from their family’s prized bloodline. When Les’s prize ram is diagnosed with a rare and lethal illness, authorities order a purge of every sheep in the valley. As a result, the brothers make an attempt to set aside their differences with hopes to save their flock and make amends.

In the documentary M.C. Escher – Journey To Infinity, Robin Lutz explores the life of the titular artist. Narrated by Stephen Fry, the film features two of Escher’s sons, George and Jan as they reminisce about their parents while musician Graham Nash talks about Escher’s rediscovery in the 1970s. The film looks at the iconic artist’s impact in culture. Zeitgeist Films and Kino Lorber releases the film in select theaters and virtual cinemas today.

Directed by Barry Alexander Brown and executive produced by Spike Lee, Son of the South is based on Bob Zellner’s autobiography “The Wrong Side of Murder Creek”. The story is set in the early ’60s in the deep south and follows the grandson of a Klansman who eventually joins the Civil Rights Movement. The film from Vertical Entertainment stars Lucas Till, Lex Scott Davis, Lucy Hale, Cedric the Entertainer and Julia Ormond. Son of the South opens in select theaters and available on VOD and digital today.

‘M to the B’ Rapper Millie B Drops New Song: LISTEN
Guided By Voices – La La Land
‘Listen To This Beat And Relax’ With Quan Aqua Faust’s New Song, “Got Me Like”
Ella Mai Announces Deluxe Edition of ‘Heart on My Sleeve’
The Doors sell exhaustive branding and catalogue rights in “monumental acquisition”