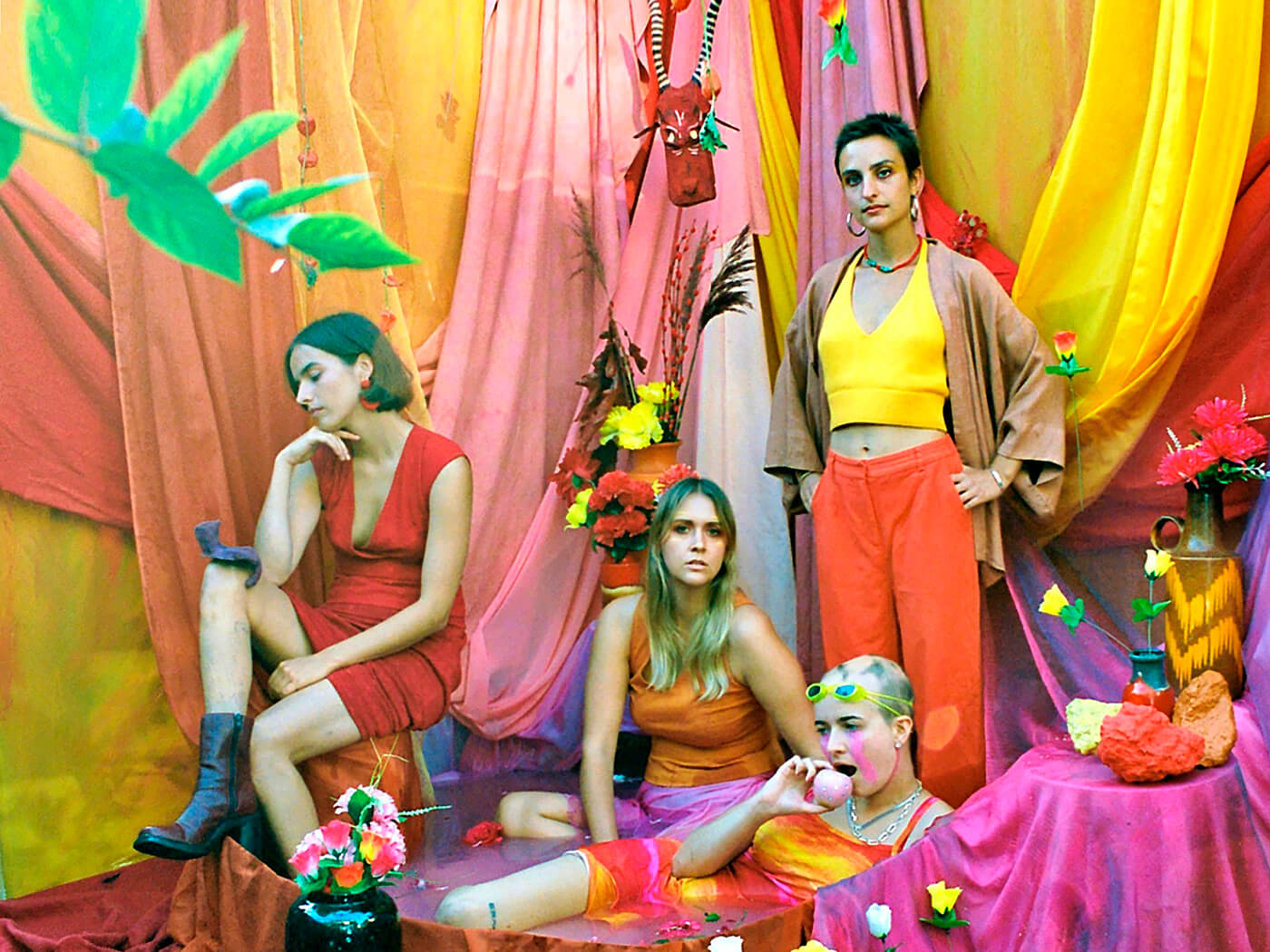 Those casting a casual glance at Goat Girl’s arrival a few years back might have thought of them as gothic punks, mixing the Bad Seeds and The Libertines on singles like “The Man” and “Cracker Drool”. Exploring the patchwork quilt of their self-titled debut, though – 19 songs in 40 minutes – stranger worlds might have revealed themselves. It all began with a nightmarish minute of queasy synth, piano and drum machine on “Salty Sounds”, and even evoked The Residents on interludes “Dance Of Dirty Leftovers” and “Hank’s Theme”. It was lo-fi, awkward and charming.

For their second effort, the quartet – currently consisting of Lottie Pendlebury (aka Clottie Cream), Ellie Rose Davies (LED), Rosy Jones (Rosy Bones) and Holly Mullineaux (Holly Hole) – have emerged from what now seems like their pupal stage into glorious, colourful flight. On All Fours is defiantly hi-fi, yet, as Berlin School synths and saxophones burble under warped guitar riffs, we’re reminded (with help from the likes of Low and Remain In Light) that glossy and crisp doesn’t always mean superficial or safe.

Goat Girl are working again with Dan Carey, but their writing process has changed as significantly as his production. Previously, Pendlebury brought in the bones of their songs, but here each member has contributed the kernels of tracks, and some, such as “Badibaba” and “Jazz (In The Supermarket)”, were created through group jams in Carey’s second studio, Davies’ mum’s garage or in the wonderfully named Yoghurt Rooms in Sussex.

On All Fours’ opener, the subtle, moody “Pest”, is the first example of Goat Girl’s predilection for gorgeously sour chord progressions, and the earliest instance of synth arpeggios, which provide a bedrock through many of these 13 tracks. There’s little of the swampy side of their debut here, with Cramps/Gun Club staggers replaced with tauter, funkier rhythms, reminiscent of ESG on the bass-heavy “Once Again”, LCD Soundsystem on first single “Sad Cowboy”, which dissolves into a beatific Café del Mar coda, and Tame Impala on the psych groove of “Bang”.

Pendlebury cites Broadcast and Stereolab as two of her personal inspirations, and those artists’ successful melding of rock and electronics seems to have been an influence on On All Fours. Even more heavily inspirational, perhaps, are Laetitia Sadier’s lyrics, with Goat Girl taking a similarly strident left-wing approach to global and social justice. So “Badibaba” finds them highlighting the hypocrisy of the West, which still benefits from the environmentally damaging industrial revolution, in criticising third-world countries for their own industrial development. The grungy “They Bite On You” finds Pendlebury equating the bites of scabies mites with the bloodsucking of capitalist parasites, while “The Crack” takes on, among other things, organised religion: “The people didn’t listen/They were singing worship songs.”

Elsewhere, there are more personal songs; on “PTS Tea”, a spiralling, darker cousin of Metronomy’s “Everything Goes My Way”, Rosy Jones tells a true story of being badly burnt by a stranger’s hit-and-run tea spill on a ferry, and expands it into an examination of wider issues about her identity and society’s expectations of it. The duo of “Closing In” and “Anxiety Feels” find Pendlebury investigating depression and attempting to make peace with her feelings – her mention of the ghost that “rushes round in and out” is inspired, she tells Uncut, by Vera, the spectre that haunts hers and Jones’s Lewisham house.

Taken as a whole, On All Fours is an impressive balancing act, creating something fresh from the group’s diverse influences, and managing to remain subversive even while it embraces Technicolor production techniques. Most enticing of all, there’s an infectious sense of freedom here; the idea that this democratic collective know they can do almost anything, that ideas can stem from any of them, and that they can take on any subject or style and effortlessly remain themselves. Right on.

Video: DaBaby Ft. Davido “Showing Off Her Body”
Randy Bachman Reunited With Long-Lost Guitar
Billie Eilish and Finneas Invited to Join Academy of Motion Picture Arts and Sciences
Cardi B Won’t Release Music Video for New Single
Emily Eavis on Glastonbury 2022: “It surely was the best one yet!”