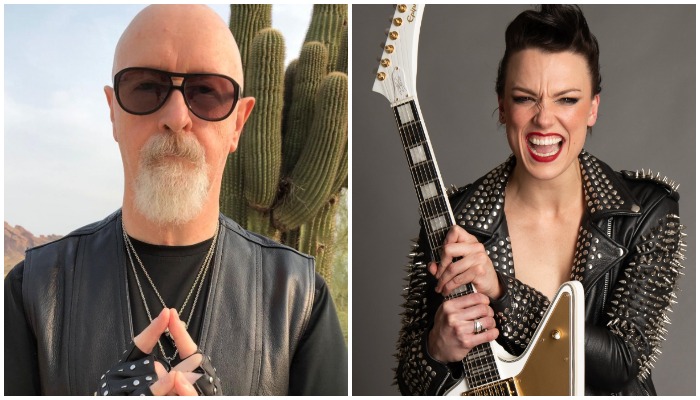 Last month, Rob Halford shared a series of photos of him in some killer high heels. As it turns out, the impressive footwear was actually a gift from Halestorm‘s Lzzy Hale.

Now, Hale has finally revealed the real story behind her gift to the Judas Priest frontman.

Read more: Did this leak just reveal new Green Day Funko Pops are on the way?

Over the years, Rob Halford has become known for his sense of fashion. His social media is flooded with photos of him in various chains, leather pieces and layered pieces of jewelry. Just last month, Halford showed off a new look on Instagram. Along with a black cowboy hat and intricate cane, the Judas Priest vocalist appeared in sky-high spiked black platform heels.

As it turns out, the shoes were actually a gift from Lzzy Hale. On Thursday, the Halestorm vocalist revealed on social media that she gifted the heels to him after a conversation they had on tour together.

“When we opened up for @judaspriest in Auckland NZ, Rob Halford and I had a conversation about my heels. So I sent him a pair of his own! Now…that night I lost count at 11 jacket changes during their set. So I may have more heels than He…but he beats me in the jack department!”

When we opened up for @judaspriest in Auckland NZ,Rob Halford and I had a conversation about my heels. So I sent him a pair of his own!
Now…that night
I lost count at 11 jacket changes during their set. So I may have more heels than He…but he beats me in the jack department! pic.twitter.com/hdr4zqnkP1

During a recent interview with Metal Hammer, Halford further elaborated on the story behind the high heels.

“When Priest were on tour in New Zealand we worked with Halestorm and I was chatting to Lzzy backstage and she had those particular heels on her feet,” Halford says. “I was going, ‘Oh my God, how do you even walk in them?’ She said, ‘Oh, you know, it’s a girl thing…’ But they looked so powerful and they scream ‘heavy metal!’”

Weeks after the conversation, Halford received a mysterious package from Hale.

Read more: Dave Grohl knows who he wants to induct Foo Fighters into the Rock Hall

“It was from Lzzy,” Halford continues. “I hadn’t a clue what it was, so I opened it up and there were those spectacular heavy metal heels! She wrote me this really sweet note saying, ‘Hey Rob, hope you’re well, lots of love. We talked about these heels in New Zealand and I found a pair for you. Have fun! Love, Lzzy.’ And I thought, ‘How sweet is that?’”

Elsewhere in the interview, Halford confesses the platform heels aren’t really all that comfortable.

“Those heels fit me, but you’re being pitched at this extraordinarily abnormal angle and then you try to keep your balance,” he shares. “I took about five or six pictures and I threw myself on the couch and ripped those shoes off and was massaging my feet, sweating from head to toe.”

What are your reactions to Lzzy Hale gifting Rob Halford new platform heels? Let us know in the comments below.