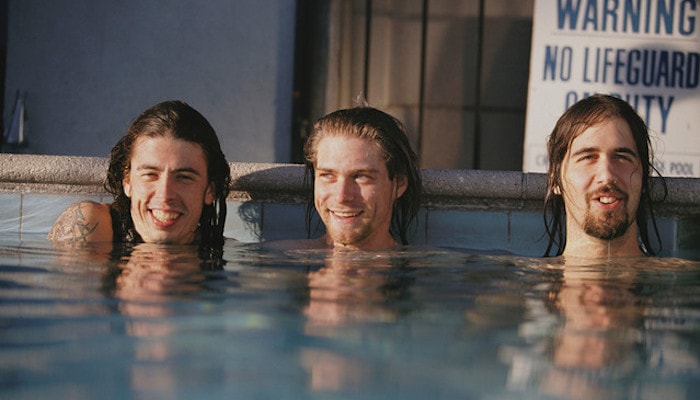 This April marks the 27th anniversary of Kurt Cobain‘s tragic death. Now, Dave Grohl is opening up even more about his time in Nirvana.

In particular, he just revealed whether or not he thinks the band would still be making music with Cobain if he was alive today.

Dave Grohl and Foo Fighters are having a pretty good February. On Feb. 5, they celebrated their 25th anniversary with the release of their 10th studio album Medicine At Midnight. Over the past few weeks, Grohl has reflected back on the past two and half decades with Foo Fighters. As expected, the nostalgic memories have caused Grohl to open up even more about his time in Nirvana.

To help celebrate Medicine At Midnight‘s release, each member of Foo Fighters has been hosting their own episode of Medicine At Midnight Radio on Apple Music Hits. Grohl recently stepped up for his episode where he got candid about working with Krist Novoselic and Kurt Cobain.

For him, he is still rather awestruck over the success Nirvana saw following the release of Nevermind in 1991.

On Apr. 5, 1994, Nirvana came to an end following the tragic death of Kurt Cobain. Although Grohl shortly went on to form Foo Fighters, he still believes Nirvana would be making music today if Cobain was still alive.

​“Of course, it was an incredibly challenging experience [Cobain’s death],” Grohl says. “And ultimately one of the greatest heartbreaks of my life that Nirvana isn’t still here today making music. Whether it would be called Nirvana or something else. It is one of my life’s greatest heartbreaks that Kurt isn’t still here to write more amazing songs because it’s pretty clear that he was blessed with a gift. I think it’s safe to say that he was the greatest songwriter of our generation. I’m very proud to say that I got to be his drummer and play those songs every night.”

Read more: Billie Eilish didn’t want to watch her documentary with her family—here’s why

Elsewhere in the Apple Music episode, Grohl talks more about his decision to form Foo Fighters after Cobain’s death. For him, the period following Cobain’s passing was difficult and made him disassociate with music for a while. As a result, Grohl didn’t know if he would, or even could, join another band.

“I didn’t necessarily want to just go join another band,” he continues. ​“I was in mourning and just the thought of sitting down at a drum set or playing music, it just made me very sad. It was even difficult just to turn on the radio. I kind of blocked it all out for a while, but my whole life I’d been recording songs on my own, by myself, where I play all of the instruments and I kept it a secret. [I] was so insecure that I didn’t want anyone to hear it, I didn’t like the songs. I didn’t like the lyrics [and] I didn’t like my voice, but I felt like it was necessary as some sort of creative exercise or outlet.”

Over the past few months, Grohl has shared some other behind-the-scenes details about his time in Nirvana. Last week, he revealed that he, Novoselic and Pat Smear still jam together as Nirvana sometimes. As well, he explained why he doesn’t care what Cobain would’ve thought of Foo Fighters. Similarly, Grohl recently explained that he still has dreams Nirvana still exists.

Last week, Foo Fighters became one of the 16 artists nominated to be inducted into the Rock & Roll Hall of Fame. Shortly following the announcement, Grohl shared who he wants to induct the band if they end up being chosen. Meanwhile, the Rock Hall nominations have sparked that debate about genre again.

What are your reactions to Dave Grohl’s new comments about Kurt Cobain and Nirvana? Let us know in the comments below.