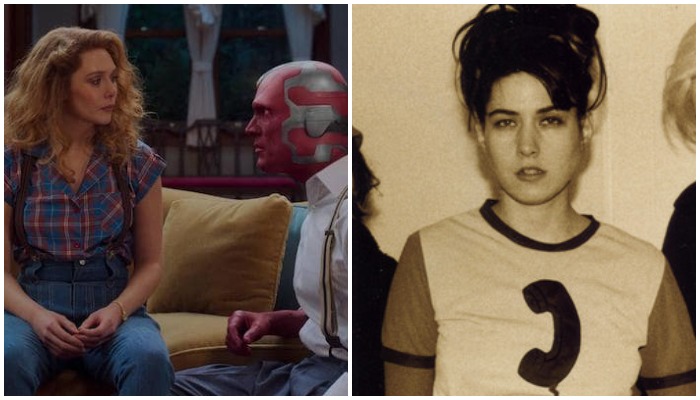 Every week, Marvel fans tune into WandaVision to see just how Scarlet Witch and Vision are handling “normal” life. In every episode, the Disney+ show pays tribute to some classic sitcoms from previous decades.

This past week, WandaVision debuted a new episode inspired by the late ’90s and early ’00s. As it turns out, that Malcolm In The Middle style theme song was actually sung by Bikini Kill and Le Tigre‘s Kathleen Hanna.

Starting in the ’90s, Kathleen Hanna rocked the music world as the lead singer of feminist punk group Bikini Kill. Shortly after, she also became the frontwoman of Le Tigre. Hanna’s activism, music and presence throughout the ’90s and ’00s has truly stood the test of time. So, it’s no surprise she was called upon for this week’s WandaVision theme song.

The Disney+ series took direct inspiration from Malcolm In The Middle for the new intro. They Might Be Giants originally performed the sitcom’s theme. However, rather than call upon the band, Disney decided to bring in Hanna for the theme song’s recreation for WandaVision.

Kristen Anderson-Lopez, who co-writes the music for the show alongside her husband Robert Lopez, confirmed Hanna’s involvement on Twitter.

I did, along with legendary Kathleen Hanna.

Read more: Billie Eilish didn’t want to watch her documentary with her family—here’s why

Along with the theme song, a lot of visuals in the WandaVision intro are similar to Malcolm In The Middle. While busying themselves around the house, Scarlet Witch and Vision are continuously interpreted by a video camera.

In other Marvel news, there are even more developments about Spider-Man 3. Earlier this week, we learned a classic villain may be returning for the new film. As well, Tom Holland tried to squash that major casting rumor, but didn’t manage to convince many fans.

What are your reactions to the Malcolm In The Middle-inspired WandaVision theme song? Did you already know Kathleen Hanna was the voice behind the track? Let us know in the comments below.