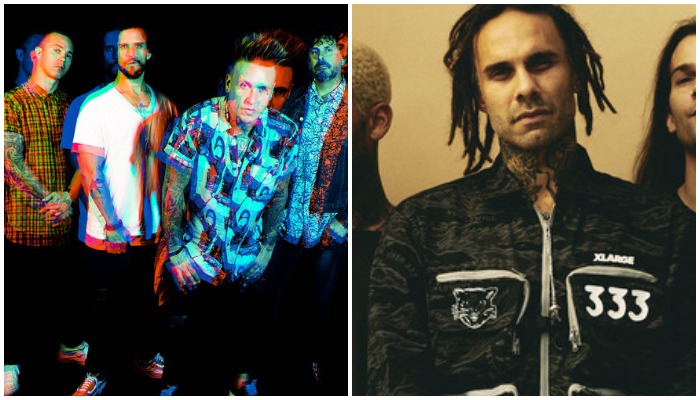 It looks like Papa Roach have even more new collaborations on the way.

This week, Jacoby Shaddix revealed that Papa Roach recently recorded a new song with FEVER 333 frontman Jason Aalon Butler. However, this isn’t the only new collaboration Papa Roach have in the works.

Over the past few weeks, both Papa Roach and FEVER 333 have unveiled some explosive collabs. Late last month, FEVER 333 teamed up with Travis Barker for their new video for “WRONG GENERATION.” Soon after, Papa Roach finally debuted their new remix for “Last Resort” with TikTok star Jeris Johnson. As it turns out, a viral remix of the 2001 track eventually led to the collaboration.

Now, it looks like Papa Roach and Butler have joined forces for a collaboration of their own. During a recent episode of the Lipps Service podcast with Scott Lipps, Shaddix confirmed that they were recently in the studio with Butler. In fact, Shaddix is comparing their new song to what Beastie Boys would sound like as a punk rock band.

“This fucking music, it’s so inspired,” Shaddix says. “It’s got such a great energy. We just did a collab yesterday with our homie Jason Aalon from FEVER 333. And it’s fire, dude. It’s awesome like punk rock Beastie Boys.”

Currently, Papa Roach’s next full-length studio album doesn’t have a release date. However, Shaddix says the band are close to finishing the new album and expect it to arrive sometime in 2022. In the meantime, they promise plenty of new music will be released throughout 2021.

“We’re a little over three-quarters of the way finished with the record, and we’re looking at dropping music later this year,” he continues. “I’ve got a bunch of remixes and guest features that I’ve done as well through the pandemic that are coming. So there’s new things that we’re gonna be dropping all year, which will wind up into early 2022 with a brand new record.”

In fact, fans are going to hear another preview of Papa Roach’s new music this week. On Friday, Feb. 19, they are debuting their new collaboration with Asking Alexandria‘s Danny Worsnop. For the collab, Papa Roach are revisiting their classic song “Broken As Me” which appears on their 2015 album F.E.A.R.

The collaboration is part of Papa Roach’s upcoming Greatest Hits Vol. 2 – The Better Noise Years. For the release, which arrives on Mar. 19, Papa Roach are giving some of their classic songs an updated twist. As well, the 21 track collection includes three unreleased remixes and two unheard acoustic recordings. Pre-orders for the album are available here.

What are your reactions to Papa Roach and FEVER 333’s Jason Aalon Butler working on a new song together? Let us know in the comments below.