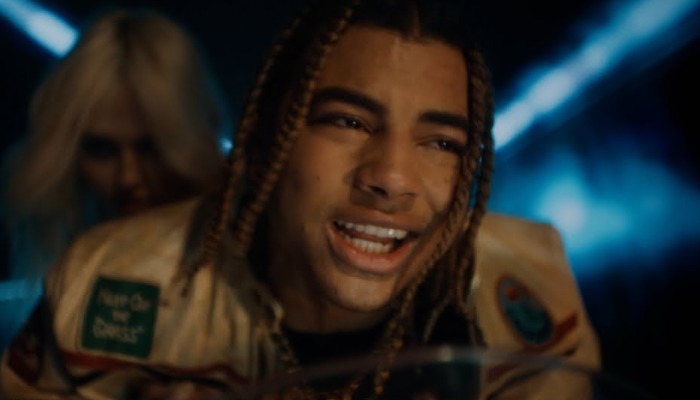 24kGoldn is back with his first new song in 2021 called “3,2,1.” The artist also finally revealed the release date for his upcoming album El Dorado.

Goldn teased the new song on Twitter earlier this week, saying, “3,2,1 drops this thursday night. u excited as i am??” Now, the brand new video is here, available via YouTube.

2020 was a busy year for 24kGoldn. His latest single follows “Mood,” featuring vocalist iann dior, and “Coco,” which saw the young singer team up with DaBaby. Goldn also participated in a number of collaborations. The up-and-comer joined up with Machine Gun Kelly and Mötley Crüe’s Tommy Lee for the collab “Climb” as part of the horror podcast HALLOWEEN IN HELL. He also had a spot on “Tick Tock” with British acts Clean Bandit and Mabel.

Back again in 2021, 24kGoldn’s new release “3,2,1” captures the emotional toll of a rocky relationship. The track comes with a dark new video by director Austin Peters. Known for his work on Orville Peck’s “Queen Of The Rodeo” and Lil Xan and Charli XCX‘s “Moonlight,” Peters perfectly captures the song’s moody atmosphere.

The hype has been building for 24kGoldn since his 2019 song “Valentino” went viral on TikTok. The rapper just revealed his highly anticipated debut full-length El Dorado will drop on March 26 via RECORDS/Columbia.

Read more: LILHUDDY unveils Travis Barker-produced track “The Eulogy Of You And Me”

The release of “3,2,1” isn’t the only big news for 24kGoldn fans this week. The singer also had a Feb. 18 appearance in the virtual event Your Attention Please: The Concert. Part of Hulu’s acclaimed Your Attention Please series, the concert celebrates Black artists in honor of Black History Month. Goldn was featured alongside a number of innovative musicians, including Lil Yachty, Swae Lee, Joy Oladokun, and Kiana Ledé. The concert can be watched by non-subscribers here.