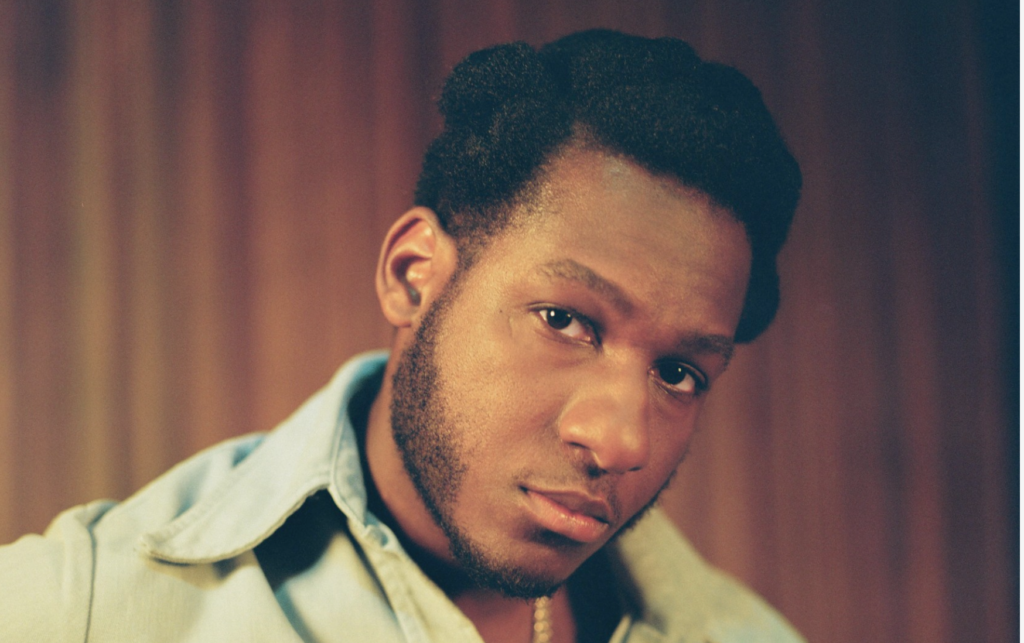 “Everything that I’ve put out has been authentic and real, but I think this is finally me finding my sound in my voice,” Leon Bridges tells Rated R&B over the phone. He’s reflecting on the process of recording his third album, Gold-Diggers Sound, which is out now via Columbia Records. The album’s title was inspired by the place he recorded it for over two years.

Located in East Hollywood, Gold-Diggers is a unique compound that consists of a dive bar, a boutique hotel, and a recording studio complex. Bridges says that he was “totally unaware” of the two latter components when he hosted his pre-Grammy party at Gold-Diggers Bar in 2018. (His sophomore LP Good Thing was nominated for Best R&B Album and his track “Bet Ain’t Worth the Hand” was nominated for Best Traditional R&B Performance at the 61st Grammy Awards. He took home a trophy for the latter award, making it his first Grammy win.)

Bridges isn’t the type of artist to let the success of his past works keep him pigeonholed. Instead, he chooses to embrace his evolving sound in a genuine way, which sort of makes him unpredictable.

In 2015, Bridges made his formal introduction with his debut album, Coming Home, which peaked at No. 6 on the Billboard 200. Rooted in the foundation of late ‘50s/early ‘60s soul, Coming Home had critics comparing Bridges to the King of Soul, Sam Cooke. The album earned Bridges a nomination for Best R&B Album at the 58th Grammy Awards. The video for his single “River,” inspired by the Baltimore uprising, was nominated Best Music Video at the following ceremony.

While it could’ve been convenient for Bridges to remain in that ‘60s soul lane, due to the immediate success he received, he ditched it on his second album. Instead, on Good Thing, Bridges opted to explore contemporary R&B stylings from the ‘70s, ‘80s, and even the ‘90s, with elements of country sprinkled in.

He explained to Rated R&B in a 2019 interview, “When I got in the game, my sound was a specific sound. It was a ‘60s R&B thing. I could have made the decision to pursue that my whole career and would have done well off of it, but honestly, I wanted to expand because we all grow as people.”

When Bridges was ready to work on his third album, he wanted to rechallenge himself. He believes that “it keeps the trajectory interesting” to constantly reinvent himself as an artist. “A lot of people that I look up to did that in their careers. The more I grow and evolve, it’s about figuring out how I can integrate my sound in this soulful thing within a modern R&B context,” he shares.

This time around, Bridges desired to be immersed in an environment where he could let go of his inhibitions and push his creative boundaries. Gold-Diggers turned out to be the perfect hub.

“I was just blown away because Gold-Diggers is a very unassuming place from the exterior. But on the inside, everything is really dialed in. The layout of it, the decor and the studio spaces [are] really beautiful,” he describes.

For two years, Gold-Diggers was Bridges’ musical paradise where he lived, partied and had late-night studio sessions. He worked closely with producers Ricky Reed and Nate Mercereau, who both contributed to Good Thing, to create his most polished album to date. “I’m very proud of this body of work,” says Bridges.

Gold-Diggers Sound opens with “Born Again,” which features additional production from Robert Glasper. It was the last song that Bridges recorded for the album. He worked on it outside of Gold-Diggers, due to the pandemic shutdowns. On this introspective tune, Bridges reflects on his feelings during the pandemic. “Feeling born again, feeling joy again / When all else fails / Your love will last forever,” he croons over French horns and guitar synths.

“I wanted to make this kind of parallel to the concept of spiritual newness in the Bible and more so talk about how the pandemic was very healing for me,” explains Bridges. “I finally got a chance to catch up with the person who had been running for five, six years.”

Throughout the album, Bridges explores more sensual themes of love. On “Motorbike,” the album’s second single, Bridges sings about living in the moment with his lover. Though, at times lyrics like “look back, see me behind you” and “I just wanna make you feel right” suggest that he’s singing about sex. He admires all the things that he loves about his woman on “Details” while expressing his physical and spiritual connection to her on “Sho Nuff.”

Everything isn’t golden for Bridges, though. He opens up about a fading relationship on the emotionally charged “Why Don’t You Touch Me.” On “Don’t Worry,” which features vocals from singer/songwriter Ink, he reminisces about his ex, who is now with someone else.

On the somber “Sweeter,” with Terrace Martin on the piano and sax, Bridges addresses his painful experience with racism and Black men dying at the hands of police officers. It’s one of the most stirring moments on the album.

The closing track “Blue Mesas” features a writing credit from Harold Lilly (Alicia Keys, Jamie Foxx). Here, Bridges muses over his struggles with becoming a public figure. “How you get lonely even though? / You surrounded by the ones you know? / Killing myself, saying these words / There’s a hurting deep down in my soul,” he sings.

In our interview with Leon Bridges, the modern soul man dives deeper into Gold-Diggers Sound.

When you first arrived at Gold-Diggers, how long did it take for you to get settled and started on the music?

Pretty much as soon as I got in, everything kind of unfolded effortlessly. That’s a testament to the people that were in the room. Normally, I would come in and we would try to conceptualize the approach in what we wanted to talk about in each song. Everything moved from there.

Last year, you dropped a joint EP with Khruangbin, as well as a few tracks, including “All About You” with Lucky Daye. Were any of those songs crafted at Gold-Diggers?

The Texas Sun EP was done outside of Gold-Diggers in Houston. The Lucky Daye collab is something that transpired out of the last day in the studio. The night before, I was out at this bar that I frequent. I ran into one of Lucky Daye’s friends. She was like, “You and Lucky Daye should do a song together.” I was like, “Yeah, that’s great if he rocks with my music.” I don’t know who reached out to him, but the next day he strolls into the studio and we wrote “All About You.”

Is there a reason why it didn’t make the album cut?

It was more so a one-off. It was challenging condensing the songs that we had down to 11 songs for an album. It’s a great song. It just didn’t make the cut.

“Magnolias” is one of the standouts on the album, partially because the production is more hard-hitting than what we’re used to from you. What’s the story behind that song?

My mother used to tell me about this Magnolia tree that was in her backyard growing up. She was always trying to encourage me to write a song about that. That’s where the title came from. As I was approaching this vibe, I was thinking of a Sade cadence and melody. It probably doesn’t make sense, but I was thinking of that vibe for this song. I think it’s a beautiful thing. The acoustic guitar juxtaposed with a modern trap kind of beat is something that’s kind of unprecedented in my music.

“Details” has this early 2000s R&B cadence to it. What’s the inspiration behind that song?

That was a song that we worked on prior to the Gold-Diggers space. I was able to collaborate with the sister group KING. I wanted to create this vibe that was reminiscent of an amalgamation of Usher and D’Angelo. It was just about paying attention to the details of a woman. It’s the details that make the bigger picture.

As for the album’s subject matter, did you go into the studio knowing what you wanted to sing about, or did it stem from conversations there?

There’s multiple ways of how certain songs are sparked within the session. When I wrote “Sweeter,” [those were] lyrics that I had been dwelling on and sitting on for a while. Sometimes going into songs, I don’t know what the hell I want to talk about. But first and foremost, in the process, normally I’ve just listened to what’s happening within the music and what’s happening with the chord. Normally the chords and the music dictate what the song is about for me. When I hear that, I’ll freestyle a melody and kind of sing incoherently over it. Then find a phrase within that and build the song around that.

Which song on the album took the longest for you to complete?

Most of them moved pretty quickly. I would probably say “Born Again.” When Ricky [Reed] reached out to me to write something and send it back in a day, it felt very daunting. It was almost at the point that I had this crippling anxiety and the feeling of inadequacy. I tried to write some lyrics to it that day. I put it away and that morning, the concept came to me. But it still took a minute to finish out the song.

The cover art for Gold-Diggers Sound is reminiscent of Coming Home. Both albums show a black-and-white photo of you with a solid color background. How would you compare these two projects?

It’s interesting because I saw a comment regarding “Motorbike” and someone said that it was reminiscent of “Twistin’ and Groovin’” from my first album. I was like, “Okay, I don’t see it” (laughs). With this album, I was able to get back to those simplistic melodies that were present in Coming Home. The way that cover turned out definitely wasn’t intentional but I think it’s awesome that it’s similar to Coming Home in ways.

Now that you’re on your third album. What do you want listeners to take away from it?

I want people to simply be intrigued by the music. This album encapsulates the multifaceted aspects of life, the peaks, and the valleys of life. There’s moments there where I’m very honest about some of my struggles. I want people to be able to utilize these songs and their experiences in life. I hope that the songs simply resonate with the audience.

Listen to Gold-Diggers Sound by Leon Bridges below.