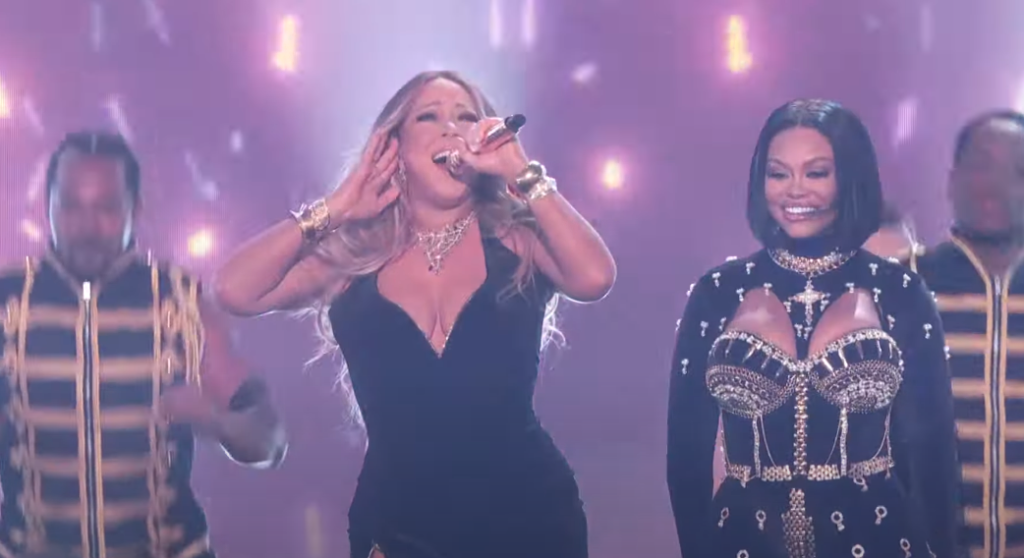 Mariah Carey made a surprise appearance at the 2022 BET Awards on Sunday night. The music icon joined rising rapper Latto on stage to perform their “Big Energy (Remix).”

Before Carey graced the stage, Latto performed her latest single “It’s Givin’” from her sophomore album, 777.

After that, Young Dirty Bastard came on stage to rap his father Ol’ Dirty Bastard’s iconic verse on Carey’s “Fantasy (Remix).” Latto then went into her “Big Energy (Remix)” and Carey made a festive entrance to help close out the performance. In the end, Latto gave the legendary singer/songwriter a bouquet of flowers.

Latto and Carey released their collaboration in March, which also features DJ Khaled.

Carey, who recently was inducted into the Songwriters Hall of Fame, made history this year as RIAA’s top certified female artist for albums sold. She has sold 69.5 million equivalent units in the U.S., breaking her tie with Barbra Streisand.

She also teamed up with Brandy to remake her 1997 fan-favorite “The Roof” from her Butterfly album. They reimagined the song as part of Carey’s MasterClass for background vocals.

On Oct. 25, the Queen of Christmas will release her children’s book The Christmas Princess, co-written by Michaela Angela Davis.

“The Christmas Princess is a fairytale for holiday lovers of all ages,” said Carey. “Little Mariah represents my inner child believing in her own vision, she represents all children, especially those who feel like outsiders or ‘others,’ striving to believe in themselves. It was empowering to transform my childhood turmoil into a modern classic fairytale full of wonder and boundless hope.”