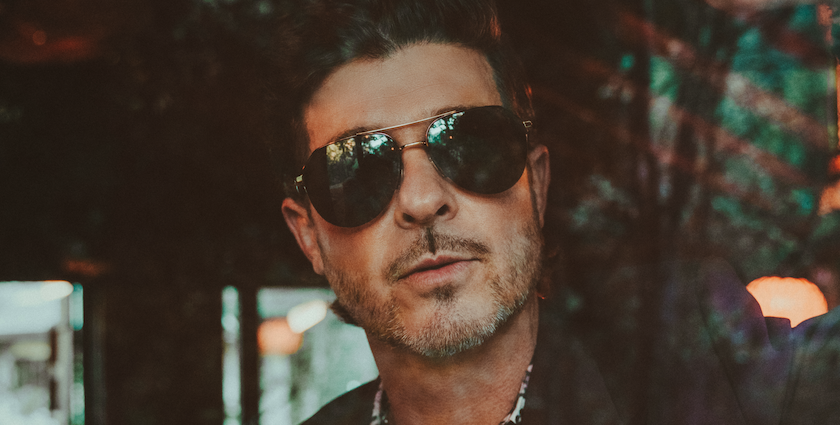 A new Robin Thicke album is underway. The Grammy-nominated singer and songwriter went to Instagram to tease that his ninth album will be released soon.

“New album coming soon,” Thicke wrote in the caption for a photo of his keyboard in the foreground, with a serene view of the ocean and cotton candy sky in the background.

Thicke’s fiancée, April Love Geary, commented on the post with another hint about the album. “Can’t wait for everyone to hear the song about my buttcheeks!!!!” she wrote. “Which one?” Thicke asked with a laughing emoji. Geary replied, “The ballad!!!!”

There aren’t many other details about Thicke’s forthcoming album at this time.

In September 2022, Thicke released his Yo Gotti-assisted single “Brown Liquor,” which he co-wrote with Rook Monroe and co-produced with Rich Skillz.

Thicke revealed in an interview with Crisco Kidd Block Party that “Brown Liquor” was a song he and Yo Gotti worked on a few years ago.

Although they worked on it ahead of his eighth album, On Earth, and in Heaven, Thicke didn’t believe “Brown Liquor” was the right fit for that project.

In February 2022, Thicke released “Day One Friend” featuring Rapsody as a tribute to his mentor Andre Harrell, the influential music executive who founded Uptown Records, who passed away in 2020.

“The song is dedicated to @AndreHarrell, my mentor and day one friend who taught me everything he knew and made my soul richer, my life better and my journey much more fun and fabulous!” Thicke wrote in an Instagram caption.

Thicke’s next album will follow 2021’s On Earth, and in Heaven. The album included the empowering anthem “Look Easy,” which peaked at No. 1 on the Billboard Adult R&B Airplay chart.

“That song was already created by an amazing writer, Nasri. What really hit me at the time, because I heard it right in the middle of COVID-19, is it made me think of the frontline workers, the mothers and the teachers — people who keep smiling, bring joy to the room and light to people’s lives in the hardest times when we face,” Thicke told Rated R&B in an interview. “When some of us can’t seem to do it, this other person keeps on shining and keeps on giving us grace. I was inspired by watching these people jump to the front lines to take care of others.”

Regarding On Earth, and in Heaven, Thicke shared with Rated R&B: “I think it’s for lovers, people falling in love, people looking for love and people that need to fall in love again.”