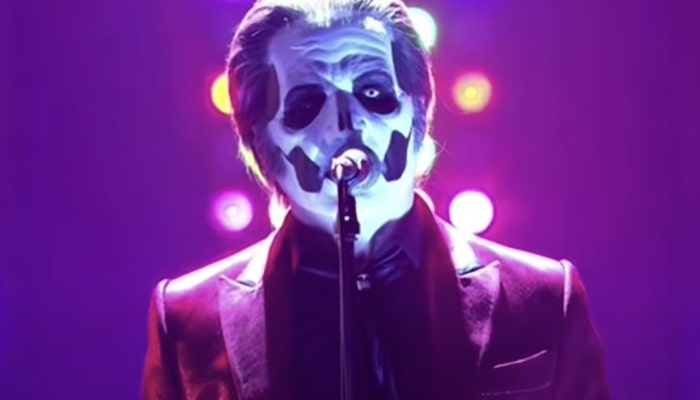 Last year, Ghost ended one era and started another when they said goodbye to Cardinal Copia and hello to Papa Emeritus IV.

Now, it looks like Ghost are further teasing their new era. Over the weekend, Papa Emeritus IV made his TV debut alongside the Swedish band The Hellacopters for a cover of a Rolling Stones classic.

Now, the whole world is finally being introduced to the new Ghost frontman. Over the weekend, Tobias Forge joined the Swedish band The Hellacopters for a performance of Rolling Stones’ “Sympathy For The Devil.”

The artists took on the Beggars Banquet classic on the Swedish television program På Spåret. The song’s opening lyrics “please allow me to introduce myself” are fitting for Forge’s Papa Emeritus IV seeing as the performance marks his first appearance since last year’s Mexico City show.

Just like so many other artists, the coronavirus pandemic derailed a lot of the plans Ghost had for 2020. At the start of last year, Ghost began working on their follow up to 2018’s Prequelle.

Soon after the Mexico City show in March, the coronavirus pandemic had spread virtually around the world. As a result, Ghost had to re-evaluate their plans for 2020. However, back in October, Forge revealed that Ghost planned to release their next album “this winter.” Soon after, it appeared those plans had quickly changed again.

During an October interview with Sweden Rock Magazine, Forge revealed that pre-production for the album had started. As well, he planned to work on writing the album until Christmas before Ghost returned to the studio sometime this month. At the time, Forge stated that fans shouldn’t expect to hear the album until late 2021.

“The plan now is for me to be here [in the studio] writing for another two months until Christmas,” Forge said. ”The idea is for the album to be recorded in January. The actual recording will last around six weeks and then there are two to three weeks of mixing and mastering. So sometime in March the record should be finished, but it won’t be released until after the summer.”

However, he did note that these plans could change. Given the unpredictability of 2020 and even this year, Ghost don’t anticipate releasing their next album until they can tour again.

“As it looks now, knock on wood, we will then go on tour,” he said. “We won’t release an album until we know that we are actually going on tour. The album release will coincide with the start of a tour. Of course, we could announce an album release date and then, for some reason, it might not be possible to tour, but that’s a whole other matter.”

At the end of 2020, a Nameless Ghoul released a lengthy statement giving fans another update on the status of their new music. The band hope to release more information regarding their 2021 plans soon. As well, they tease that plenty of “big things” are on the way this year.

“With this, I want you all to know that we are working diligently on several big things for next year, so please do not confuse our silence with inactivity. And I confess, I wanted to reach out to let you all know we miss you, eternally.”

What are your reactions to the “Sympathy For The Devil” cover performance? Are you ready to hear new music from Ghost? Let us know in the comments below.