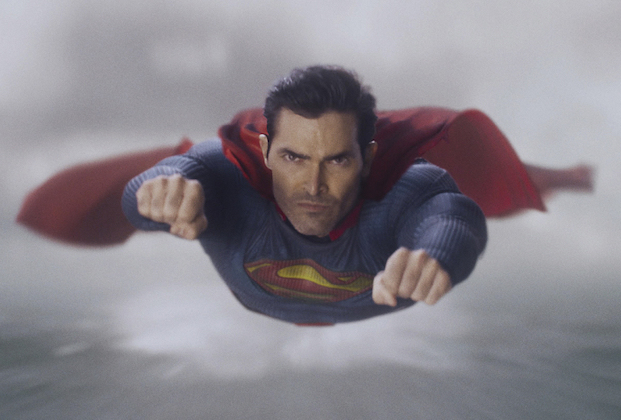 True story: Despite being a Smallville superfan, I have had zero interest in Superman & Lois since the day it was announced. For one, it overlaps with Supergirl’s own run on The CW (which we now know to be ending), and TV’s Girl of Steel has already and liberally borrowed from her cousin’s comic book lore. Plus, this iteration of Clark and Lois comes with, ugh, teenagers.

Well, here is today’s headline from the Smallville Gazette: Superman & Lois works. And oftentimes it is quite wonderful.

Picking up some amount of time after the events of the Arrowverse’s “Crisis on Infinite Earths” — the ripple effects of which (among other things) doubled the number of Clark and Lois’ sons and apparently aged them a bunch — Superman & Lois stars Tyler Hoechlin and Elizabeth Tulloch, reprising their roles from Supergirl. Premiering Tuesday, Feb. 23 as part of a two-hour event, the supersized pilot kicks off with an extremely efficient and highly engaging montage narrated by Clark, that recaps his arrival on Earth as an infant, hits several of the usual beats (including him dorkily meeting Lois), and brings us to where we are today. 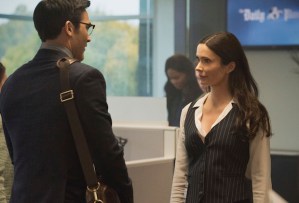 Clark and Lois are colleagues at the Daily Planet when the series opens, while twin sons Jonathan (Little Fires Everywhere‘s Jordan Elsass) and Jordan (Alexander Garfin) are respectively a confident high school QB and a loner diagnosed with social anxiety disorder. The family’s life in Metropolis seems fine enough, though Dad is “away” a lot for work, and even when he’s home, Jordan tends to retreat to his video games (where he fights against Superman. #SuperAwkward). 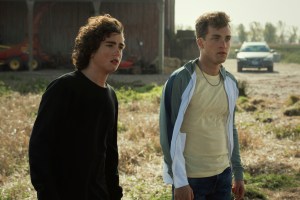 The Smallville visit also paves the way for a crisis that leaves Clark no choice but to finally reveal his superhero identity to his sons — resulting in an array of reactions that really kick the series into whole other gear, and steer the brothers on distinct paths.

Rounding out the cast is Dylan Walsh (Nip/Tuck) as Lois’ father, General Sam Lane (conceived here as a bit less of a militaristic blowhard and more as a duly concerned father whose super son-in-law is on speed dial), while Wolé Parks (All American, Vampire Diaries) plays an ominous stranger who enters Superman’s orbit. More on him in a bit.

As directed by Lee Toland Krieger, the 90-minute pilot is every bit as cinematic as you have heard, and then some. It has none of the slick veneer of, say, The Flash or Supergirl, and it certainly is not gritty like Arrow. Instead, the earthy feel and tone (showrunner Todd Helbing wrote the script based on a story by him and EP Greg Berlanti) is best likened to Berlanti’s own Everwood and… the parts of Man of Steel that weren’t busy leveling buildings and endangering thousands of innocents.

How did Superman & Lois win me over, despite my resolve to be apathetic? For one, we simply haven’t seen this live-action Clark and Lois story before, as struggling parents. And because of that, it perhaps never dawned on anyone that Clark could be, well, a bit of a crappy dad, regularly missing family events and gravitating toward the (preternaturally?) athletic son. Those dicey topics, and the way the first episodes get into them, are different and interesting.

Secondly, the youth cast is quite good — more perfect picks by Arrowverse casting whiz David Rapaport. As Jonathan, Elsass evokes a warmer version of This Is Us‘ teenage Kevin; Navarrette is winning as Sarah, who grapples with issues/meds akin to Jordan’s; and Garfin brings just enough light to dour Jordan that we root for the lad’s turnaround. Among the new adult cast, Rayner (an English actor) gives Edge a slightly sassy international bent, while Sofia Hasmik (the Mad About You revival) is a nice splash of comic relief as Smallville journo/Lois Lane superfan Chrissy Beppo.

Of course, the best Superman stories have a compelling villain. I like that, at least based on the first two episodes made available to press, we do not seem on a path toward disposable Meteor Freaks of the Week. Instead, Parks’ character — and all that he represents, as is jaw-droppingly revealed in Episode 2 — promises to fuel a lot of story, and story that might go in directions you do not expect.

Lastly, and on a superficial level, the design and “sculpting” of Hoechlin’s supersuit is a tremendous upgrade from anything he has sported before, and on-camera is far more in the style of Supes’ most recent big-screen incarnation.

THE TVLINE BOTTOM LINE: Superman & Lois flies the Arrowverse into brand-new territory — and we’re along for the ride.